Two years following the publication of the study book ‘Diversiquette, Etiquette in the Workplace’, an English-language version entitled International & Intercultural Business: diversity, inclusion, etiquette was published in August. With this book both authors, Yvonne van der Kroft and Ria Doolaard, focus on a broad group of (international) students from various cultures.

Persistent errors are made, including during business transactions, that can be avoided by acquiring concise knowledge during the course of the study. Becoming aware of the Do’s and Don’ts elsewhere in the world can help determine the success or failure of a business trip. It’s often a close call. When getting to know each other, when handing over a gift, at the table, accents are different all over the world and there is a risk of miscommunication. This is true not only in far-off countries with their own benevolence, but also in countries located just around the corner. Notorious and feared, for example, is the way Brits mobilise their language, which often leads to dramatic misunderstandings among listeners who are not native speakers from the United Kingdom. A classic example: ‘interesting’ as a reaction by a British person to the suggestion of a non-British interlocutor. Meaning: What madness!

In parallel with and based on the subject matter in the books Diversiquette and International & Intercultural business, the authors have developed a program consisting of 40 course hours. They are also happy to help set up this type of course and provide training for teachers. In addition, guest lectures and workshops for students can be arranged. 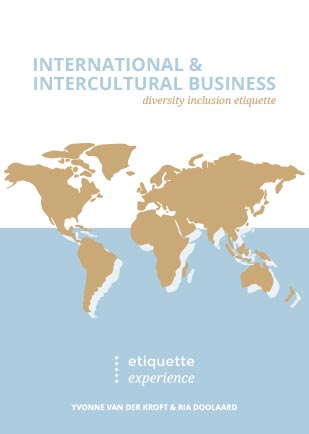